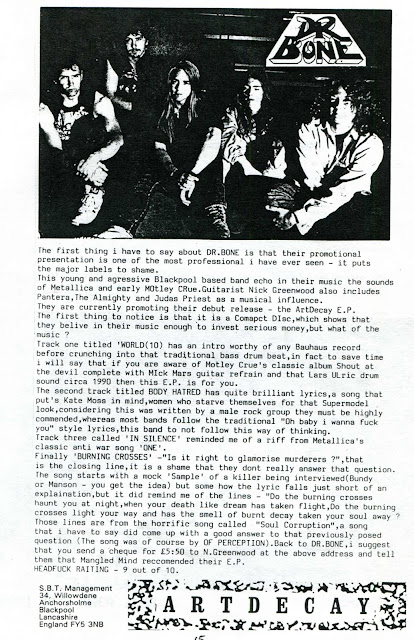 From the December 1993 issue of Mangled Mind:
"The first thing i have to say about DR.BONE is that their promotional
presentation is one of the most professional I have ever seen - it puts
the major labels to shame.
This young and aggressive Blackpool based band echo in their music the sounds
of Metallica and early Motley Crue.Guitarist Nick Greenwood also includes
Pantera, The Almighty and Judas Priest as a musical influence.
They are currently promoting their debut release - the Art Decay E.P.
The first thing to notice is that it is a Compact Disc, which shows that
they believe in their music enough to invest serious money, but what of the
music ?
Track one titled 'WORLD(10)' has an intro worthy of any Bauhaus record
before crunching into that traditional bass drum beat, in fact to save time
I will say that if you are aware of Motley Crue's classic album Shout at
the Devil complete with Mick Mars guitar refrain and that Lars Ulric drum
sound circa 1990 then this E.P. is for you.
The second track titled 'BODY HATRED' has quite brilliant lyrics, a song that
puts Kate Moss in mind, women who starve themselves for that Supermodel
look, considering this was written by a male rock group they must be highly
commended, whereas most bands follow the traditional "Oh baby i wanna fuck
you" style lyrics,this band to not follow this way of thinking.
Track three called 'IN SILENCE' reminded me of a riff from Metallica's
classic anti war song 'ONE'.
Finally 'BURNING CROSSES' -"Is it right to glamorise murderers?", that
is the closing line, it is a shame that they don't really answer that question.
The song starts with a mock 'Sample' of a killer being interviewed (Bundy
or Manson - you get the idea) but some how the lyric falls just short of an
explanation, but it did remind me of the lines - "Do the burning crosses
haunt you at night,when your death like dream has taken flight,Do the burning
crosses light your way and has the smell of burnt decay taken your soul away ?
Those lines are from the horrific song called "Soul Corruption",a song
that i have to say did come up with a good answer to that previously posed
question (The song was of course by OF PERCEPTION). Back to DR.BONE,i suggest
that you send a cheque for £5:50 to N.Greenwood at the above address and tell
them that Mangled Mind recommended their E.P.
HEADFUCK RATING -9 out of 10."


Posted by JohnnyCeed No comments:

Dr Bone: The Video and CD That Never Was Flyer 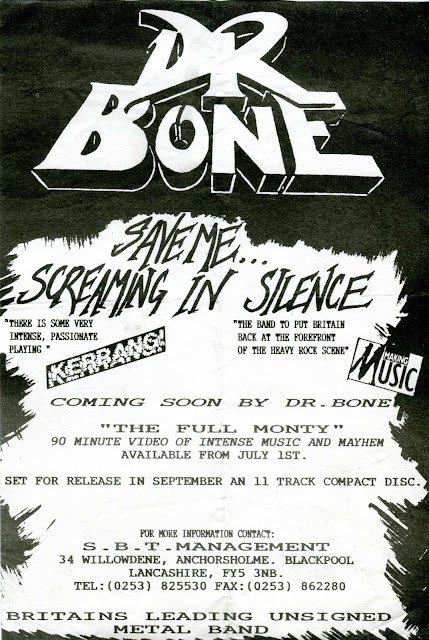 'The Full Monty' - the follow up to Dr Bone's Dodgy Vid never happened. Neither did the 11 track CD.
Posted by JohnnyCeed No comments: 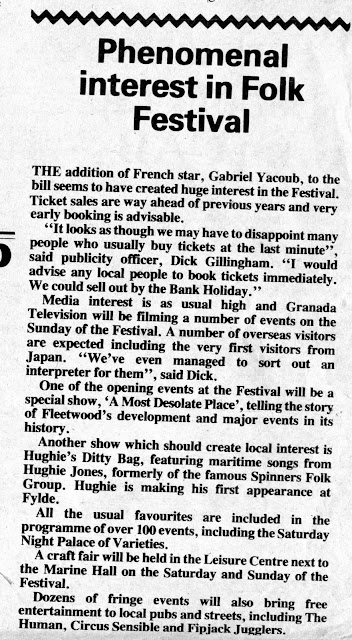 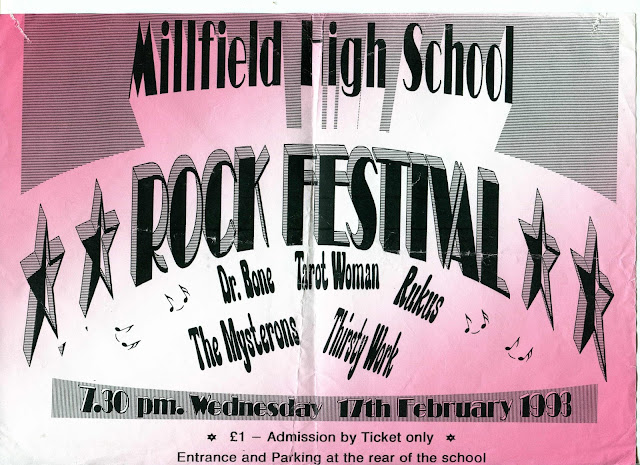 17th Feb 1993 with Thirsty Work, The Mysterons, Rukus and Tarot Woman
Posted by JohnnyCeed No comments: 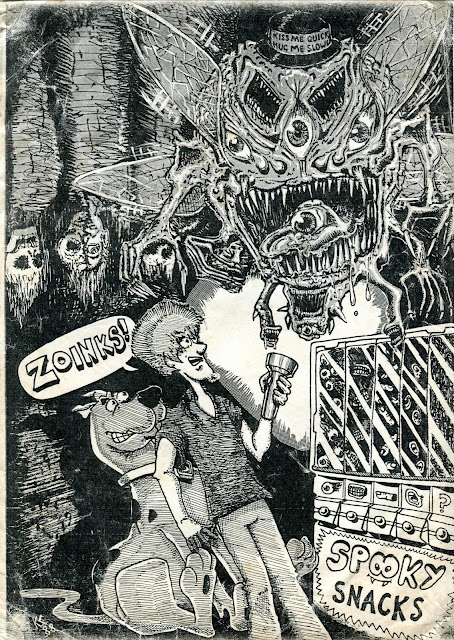 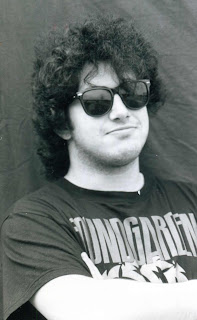 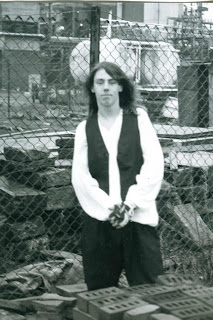 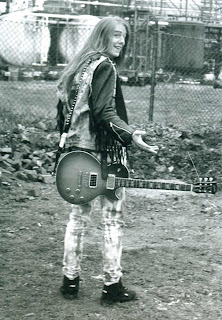 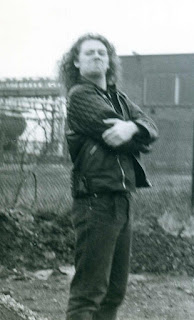 Blog Your Face Off